Many years ago I volunteered, no, actually demanded, the opportunity to teach a course we called BIOS 204: Biodiversity, in the spring semester. I knew from many years in the large introductory courses that students who hated me, or were afraid of me, in the fall semester of BIOS 101 would avoid me like the plague in second semester, and that students who appreciated my efforts would enroll in BIOS 204. That guess was about 52% correct. I wrote the labs for my spring students, usually about 260 of them in a single lecture section, but 24 to a lab. We did all sorts of wonderful things that are either forbidden nowadays for liability reasons, or more likely, too difficult for teaching assistants who are not parasitologists, therefore not microscope-literate, to teach. However, Biodiversity also involved me having to learn a hell of a lot of biology that I’d either avoided for the previous 30 years (e.g., botany) or was never exposed to (e.g., mycology). Among the most pleasant of surprises involved fungi. I made up a lab exercise in which students opened an agar plate, touched their four fingertips to the agar, returned the lid, and set the plate aside for a week so that bacterial and fungal colonies would grow from the micro-organisms that had been on their hands. That was a truly wonderful exercise. People saw themselves in terms of fungal and bacterial colonies. Eventually I started re-living my whole career, deciding at the age of 23 not to become a parasitologist, but instead study fungi, like those living on dead trees in Costa Rica. My material would be beautiful, exotic, easy to smuggle across borders and grow in my lab, and some of it would be edible. And so in Costa Rica I take picture after picture of fungi, just to remind me of that long ago intellectual experience and the revelation that some vicious campus politics had provided, namely, the beauty of fungi, especially deep in the rain forest. 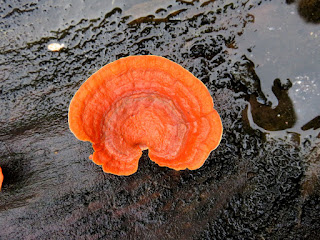