In preparation for this Costa Rica trip I put two empty plastic prescription vials in my camera bag. I do this because many decades ago, on a drive from New Orleans to Houston, I stopped along a beach south of Beaumont and picked up a handful of sand, putting it in some kind of a found container. Back home in Lincoln, I took this Texas sand up to the lab and dumped it into a Petri dish for study under the microscope. Why did I do both of these acts? That question is easy to answer: when my father took a Micropaleontology course, probably in 1934, he made a box of slides with foraminiferan shells—intricate and beautiful objects constructed by oceanic amebas millions of years ago. When he died, I claimed those slides and used them regularly in teaching. I then started asking students to bring me ocean beach sand from their travels, knowing that some of those sands would contain foraminiferan shells. Over the years I collected sand samples from all over the world, brought by students from many different countries. Now I never go near a marine beach without collecting sand, hoping to find “forams.” So in Costa Rica, I scoop up some light sand at Cahuita (left, below) and dark sand near Manzanillo, and put the samples in those script vials. The big question in my mind is whether I can get them through airport security and customs. It is, after all, 2018, and I’m flying from a Latin American country back home into a nation headed by a pathologically insecure, scientifically illiterate, xenophobic president.

As a kid growing up in Oklahoma, our house was filled with geology talk. By the fourth grade I knew what “samples” were for and how they were used by petroleum geologists. Thus sixty-five years later when it came time to write a mystery novel, I picked as my main character an academic, a micropaleontologist who, through his travels and collections had become an expert on soils and ground up stone in general, including that from deeply-buried Paleozoic formations. If you murder someone and dispose of the body, the dirt you and your victim have picked up along the way turns out to be evidence that a soil expert can analyze, in court, if necessary. Naturally, before I’d finished with the fourth Gideon Marshall Mystery, part of a five-book essay on scientific illiteracy, it became necessary. So I pick up sand, hoping to find foraminiferan skeletons like those Dr. Marshall might find in mis-labeled samples from a mile beneath some Oklahoma drilling rig. There were none of these ameba shells in my Costa Rica samples; instead, there were echinoderm skeleton pieces, some obviously wave-worn. But if I were in court, testifying as an expert witness in a murder trial, could I tell the difference between these two locations, just by looking at beach dirt? Of course. 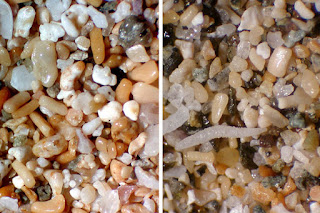