7. Seventh in a series of short writings about our recent ecotourism trip to Costa Rica

For some reason I tend to take lots of pictures in which objects are reflected in water: zebras drinking from a pond in Tanzania, vegetation along an Amazonian tributary in Peru, cattails across a western Nebraska lake, and a squirrel leaning over the pool at the Oklahoma City bombing memorial. I find reflections to be highly metaphorical. The image, the original, the real one, whether it be a tangible object like some animal or plant or work of art, or a less tangible one like classical music, literature, or even a completely intangible one like an idea, and opinion, an assertion, is always distorted when it’s presented in another medium. The extent of distortion depends entirely on how chaotic is the medium in which the original is reflected. In this egret’s reflection you can see the long feathers that fall down from the neck, but the head is too distorted to recognize. My immediate reaction is sarcastic and political, a product of my times: in this reflection you can see the decoration, the plumes that once graced women’s hats, but the brains are unrecognizable. You can’t see the head because our boat, our presence, has disturbed the water. And so I look at this digital photograph that I took in Costa Rica and I’m reminded of the president of my nation.
But in a far less sarcastic and political way, this picture, and all the others with reflections, remind me of my daily commute to the university, my walk across campus to the student union, my coffee and chocolate that have been my companions as I sat in that building and wrote eighteen books over the years since 1980. The decision to do this creativity hour is the constant; the events and situations that surround that hour are the environment in which the product is reflected. Sometimes those events and situations have been calm, so that whatever ends up on paper is indeed a true representation of my intent; at other times the environments reflecting that creativity have been disturbing, thus distorting the image of my intent into something that needed some serious editing or even gave rise to an entirely new and unexpected train of thought. And in this photograph of a snowy egret near Tortuguero, the plants are also reflected; their leaves have become rectangles; the environment in which we choose to look at them determines what we conclude about their basic nature. 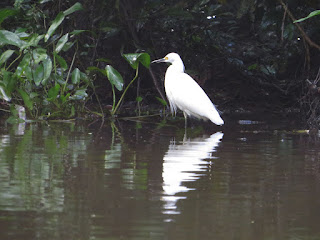