Excerpt from a work in progress


Land Cruiser windows are open and the top is raised. We’ve started on our morning game run into Serengeti National Park. Prosper Huale, our driver, negotiates ruts, small boulders; his radio spouts Swahili and static. Someone’s seen a leopard in the rocks. Flies come in. Tsetse flies are larger than familiar house flies, and their wings, instead of being held slightly out, are laid straight back over their bodies. Tsetses make a buzz; they land on necks, arms, cheeks; passengers swat. Prosper pulls out his fly whisk, made from a giraffe tail, and passes it around. I decline; one of my African trip goals was to get bitten by a tsetse fly. Now it’s there, on the back of my left hand. I slowly reach for the camera with my right hand as it sinks its proboscis into my skin. Blood starts to flow. I see red in its feeding tube. Luckily the road is reasonably smooth. I take picture after picture. One of them turns out to be perfect. 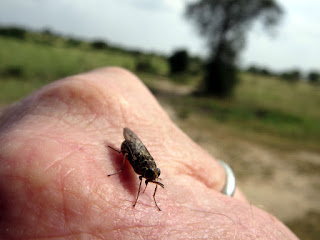 
The essay test (either long or short answer):
(1) Work on your penmanship. Practice writing legibly.  You may be perfectly capable of reading your own handwriting, but that remarkable skill doesn’t mean that anyone else can read it. Poor handwriting is probably the source of more lost points on essay exams than any other factor. Profs just get sick and tired of trying to decipher scrawl. Often, however, if you’ve answered the first question well, they’ll skip through the later scrawl and give you the benefit of the doubt. But don’t count on this lucky event happening; the first question might be the one you know least about, and in that case, the scrawl-skipping will work to your distinct disadvantage.
As a rule of thumb, some perfect stranger should be able to read your handwriting as easily as he or she reads a printed page. Always (always!) use dark ink—black or dark blue—or if a pencil is required, a dark and sharpened lead. Your letters should be large enough to read at arm’s length. Never trust a college prof to have eagle-eye vision (or an owl’s hearing, either), especially if he or she is over the age of 50.
(2) Work on your grammar.  Whatever you do, do not make any of the truly common mistakes made by college students (see also the next chapter on papers).  The truly common mistakes are:
a. Using “it’s” when you actually mean “its” or vice versa.
b. Using “alot” when you actually mean “a lot”.
c. Using “there” when you actually mean “their” or vice versa.
d. Using the wrong verb form. If you were born in the United States, for example, there is no excuse for using “went” when you mean “gone” either in writing or in speech.
e. Using the incorrect possessive form of any word, for example “cars” when you actually mean “car’s.”
This list could be much longer, but I believe you get the drift. Poor grammar will hurt you not only on the next exam, but also on the next job interview, the next potential promotion, and the next time you have to accomplish some real business in the real world, whatever that business might be, including contracts, agreements involving money, pre-nuptial agreements, divorce proceedings, complaints to a school board about how your child is being taught, you name it. Use correct grammar. Alternatively, change your name to one that sounds exceedingly foreign so that the person reading your writing believes that English is your second language and you’ve just started learning it. Then you’ll be admired instead of ridiculed.
(3) Practice writing in complete sentences. Failure to write in complete sentences is probably the second most common source of lost points on essay exams mainly because such failure suggests to a grader that you are not well educated and thus don’t know much about anything, including the subject over which you’re being tested. You may also have been told to write in complete sentences, so read the directions and follow them before you start your essay. If you can easily generate sentences that are grammatically correct and at least 15 words long, then you have taken a major step toward getting better grades on all essay exams no matter what the subject.
(4) Practice writing short paragraphs in which there is both an idea and a fact to support the idea. This essay technique is usually difficult for students to learn, but it’s the technique that profs use all the time in their own work. So if you can master it, then you’ve made some major progress toward actually getting better grades, especially if you combine this technique with the above advice. Beyond these four behaviors, only true knowledge and understanding of the subject matter stands between you and better grades. Now for the most difficult of all exams:
The multiple choice test:

Buy OUTWITTING COLLEGE PROFESSORS, 4th Ed., on all e-readers and as a nice gift paperback from amazon.
Posted by JJ at 1:50 PM No comments: