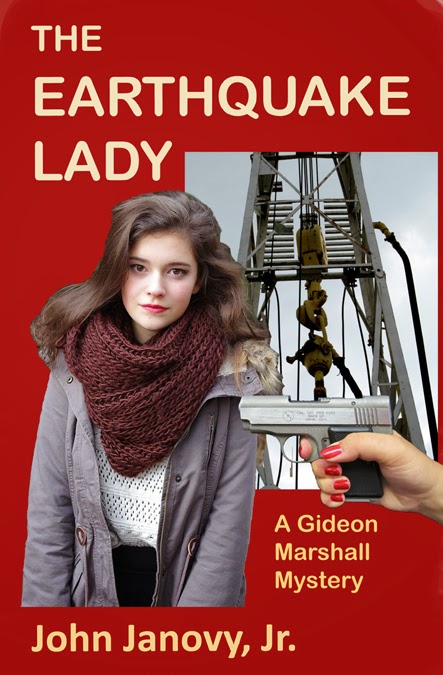 
“I have a contact person for you in Oklahoma City,” he says; I would be able to identify his voice even if it were not modified by the recording. He reads the name and mobile phone number, twice. He spells the name—L-I-N-D-E-N A-L-B-R-I-G-H-T—and repeats the number. He finishes with “she knows you’re coming.”
“‘She’?” says Mykala, raising an eyebrow. “‘She’? Okay, let’s envision this vixen: tall, leggy, redheaded, I mean a flowing mane of red, tight pants, tight blouse open to the second button, toting a not-so-concealed, great big, pistol.” Her mouth takes a twist. “I mean a great, big, really big, pistol that will blow the crap out of anything!”
“Straight out of the movies.” My contribution to this conversation.
“Exactly!”
“Okay, let’s bet.” Our regular bet is a month of sex. We never win or collect. “I’m betting she’s an opposite gender version of detective Burkholder.”
“You’re on,” she says; “I’m going with the movie babe, Linden Albright, heavily armed.”
I learned a long time ago to never talk about women in any except the most neutral of ways. If you’re a college prof today, conversations containing any reference to gender are restricted to name, education, area of expertise, and place of residence. For example, Rebecca Stitcher, PhD, University of Arizona, historical geology and theoretical plate tectonics; place of residence is Highland Cemetery near Ottawa, Kansas, the town from which her mother and sister were picked up and brought to our Parker Funeral home to identify the body. I assume that whatever DNA samples were required from Rebecca were taken before she left the morgue in Des Moines. It would be nice and respectful for someone who garnered so little respect in life, at least around my department, if she doesn’t have to be exhumed for forensic reasons.
If the female is a student, conversations about this individual include name, student ID number, year—freshman, sophomore, junior, senior, fifth year senior—and grade, depending on the people involved. The last time I heard “blonde” was down at The Watering Hole and the story was a “blonde joke” about an imaginary person doing something really stupid. Only guys were in this particular discussion of academic politics and the session was fueled by beer. I have no mental image of Linden Albright; Mykala has already cast her in a Quentin Tarantino film.
The Burkholder phone call ends with his typical five second pause, then
“She’s expecting you tomorrow afternoon late.” Another Burkholder pause. “Give her a call when you get close to OKC.”
“We’re leaving for Oklahoma tomorrow morning early?”
“I’m not sure he said anything about both of us.” That’s clearly the wrong thing to say.
“Gideon.” Now it’s that tone I hear about once in a decade; “you are not going anywhere involving this investigation without me.” Now she gives me the Burkholder pause. “Mainly because you can’t hit shit with a pistol.”
She’s right. Maybe, based on what I saw at the firing range today, I don’t even have to carry one.
The first two Gideon Marshall Mysteries—BE CARFEFUL, DR. RENNER and THE STITCHER FILE are available as nice paperbacks from Amazon and as e-books on all e-readers. Get them both now so you’ll be ready for THE EARTHQUAKE LADY!
Posted by JJ at 7:20 AM