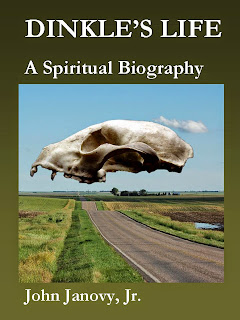 Strolling, thinking, analyzing, Dinkle chooses a brick-paved walk through the older part of campus. Hell to be in this mood. He kicks at twigs. What could be more dangerous than an idle mind, especially one with nagging unfinished business? He savors the knowledge that what he’d done before with spare time—the list of his great works, culminating with The Nature of God. He frowns at the suspicion that he cannot top his own performance. Not that he considered it so grand, of course, to be the one who writes a classic, mind-bending, incendiary bomb too hot for libraries. Did Charles Darwin know what he’d done? Karl Marx? They may have thought something at the time, or wished, whispers LPD, out loud; but did they know, actually know what they’d accomplished, as he did? Probably not, he concludes; they could not have known.
The mockingbird flies to the top of a small, newly planted pecan tree and with hardly a break in its rhythm dumps a stream of notes down Dinkle’s back. For the first time in my life, he says to the bird, I’m stumped. Hands in pockets, he looks back into the Wichita Mountains. At fifty-five, Theory of Complex Systems having done its nasty work, freeing innumerable patterns from their prisons of chaos; Mystic Experience Correlates having hypnotized the daytime television crowd; the theoretical portions of Subatomic Sociology having destroyed the few remaining hunter-gatherer societies; and The Nature of God having . . . having . . . well, now just what did The Nature of God accomplish? Nothing. Wait. It had, so far, done something no other power in the universe could do: It shut down Lonnie Paul Dinkle’s mind and put him to physical work for a year.
Ants scurry on the bricks, a mound of finely chewed soil marking their origin. Dinkle stops, digs in various pockets for his glasses, finds them in the left rear. He’d sat on them. And on his cigarettes. Now which is worse? he wonders. It depends on whether one wants to smoke or study ants, he concludes. A sudden pain sweeps through his forehead, down his neck, and into the region of his chest. It happens every time he gets down on his knees. Luck I don’t have much need for prayer, he says to the ants. The glasses are too dirty and bent for use. He sits back on his feet, a giant doughy groundhog, and starts bending the frames and polishing the lenses on his shirt.
“Hello, Dr. Dinkle!” He looks up at a bare leg. “I loved your speech!”
“Did you understand it?”
“As well as I’m supposed to at this stage of my life.”
“And your parents?”
“We enjoyed it, too.” Dark trousers, wingtips, stood to the left; a slightly slit skirt and high heels to the right.
“Thanks!”
“Sorry to disturb you. Say ‘hello’ to the ants, Dr. Dinkle.”
“Congratulations!” The three pairs of legs move out of his field of vision as he gets down on his elbows. He sees organization, communication, specialization, life, death, territoriality, defense, agriculture, architecture, bustle, a society that outlives its individual members, all within inches of his face. He struggles back to his feet, dizzy for a moment from the effort, puts his glasses back into the left rear pocket, and looks back toward the mountains, over the city that lay beside a river, then down at the ants, then back at the city.
(DINKLE’S LIFE is available on all e-readers.)
Posted by JJ at 8:36 AM